Notes for setting up a Raspberry Pi 4 for audio work 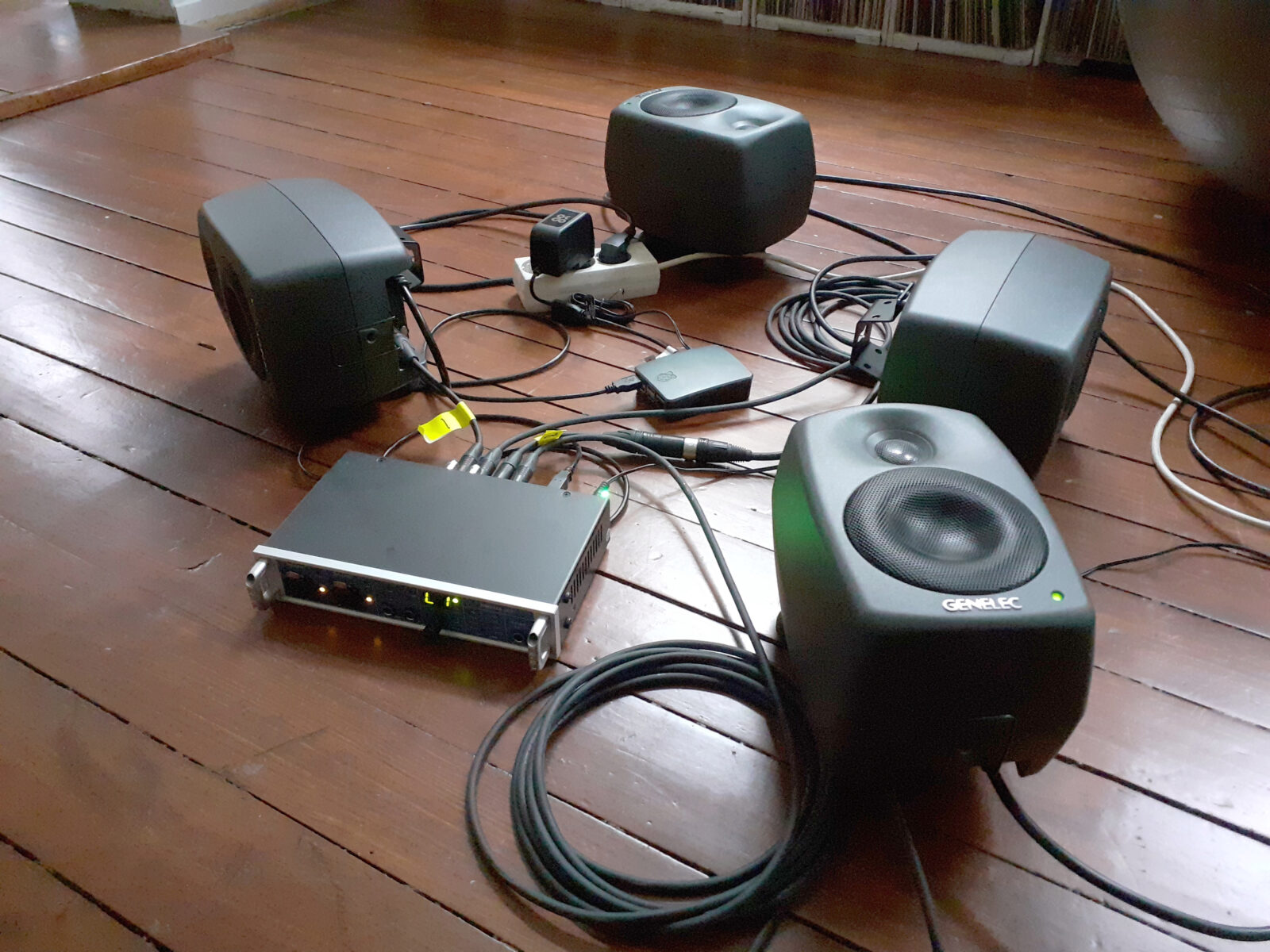 These are notes for setting up a Raspberry Pi 4 single board computer for pro audio work. Specifically for running SuperCollider programs for interactive installations.

I used Raspbian Lite for this, since my intention is to run the Raspberry Pi in headless mode, meaning using no display and no desktop environment (to save resources).

It is presumed that you have installed Raspbian on an SD card, with ssh enabled (allowing you to log in to the pi over the network and execute commands using a terminal), and that you are logged in.

When logged in to the Pi via ssh, we can setup everything from the command line fairly quickly.

You may skip this step if you already have a Raspberry Pi setup with ssh and you are logged into it. Otherwise, here are the steps needed to get access to a fresh Raspbian Lite installation from another computer.

To install Raspbian Lite on an SD card, plug the card in to your computer.

Next, flash it onto your SD card. The easiest way to do this is by using Balena Etcher. With this program you can open up the image for Raspbian Lite, choose the SD card and click flash.

Note: On some Linux systems you may need to start Balena Etcher using sudo to allow it access to the SD card.

With the flashed SD card containing your Raspbian Lite installation still in your computer, find the boot folder on it. Create an empty file here called ssh.

This will enable ssh upon boot and allow us to control the Raspberry Pi remotely.

To automatically connect to your WIFI network on startup, you need to add another file to the boot folder.

This one should be named wpa_supplicant.conf which will contain information about your network.

You can copy and paste the snippet below into this file, but make sure you do the following edits to it:

Save the file, put the SD card back into your Pi and plug the power cord into it to boot it. Wait a few minutes for it to boot.

If you followed the steps above, your Pi should now be connected to the same network as your computer.

To do this, you need the IP address of the Pi. See this article which contains some nice ideas on how to do this.

Once found, you can log in from your computer by opening up a terminal and executing ssh pi@address, replacing “address” with the actual IP address. If succesful you should now be prompted for the password of the pi user which by default is raspberry.

If on your host computer you are using kitty as your terminal emulator you may experience some annoyances if you ssh using the normal ssh command. This is because the Pi isn’t recognizing your terminal type.

You can fix this by from your computer ssh’ing using kitty +kitten ssh instead.

Run this command to install git and perl which are important packages you will need later on.

Optionally you can install these programs as well which are nice (vim is a text editor, htop is for monitoring system resources and tmux is for multiple terminal windows). They are optional but I always use them.

The following commands are based on the canonical instructions for tuning your linux system for audio work.. Warning: These will alter config files on your system, use at your own risk and only on a fresh Raspbian installation.

I gathered these in a handy gist, so you can execute them just by copy-pasting this (extremely long due to gist url’s) command:

This is the full script:

To make these changes take effect, the pi must be rebooted

Jack is used to patch audio throughout your audio system on Linux. In this case we will mostly use it to patch audio from software to the hardware output.

Jack has a configuration file in ~/.jackdrc that we will set up on installation, but you can edit this anytime to tune the system’s settings using a text editor by running nano ~/.jackdrc for example or vi ~/.jackdrc. The config file consists of a jackd command which will be run by SuperCollider when we boot the audio server in there.

Explanations of the flags used here:

Additionally, Fredrik Olofsson pointed out to me that it can be useful to use the -p-flag to restrict the number of possible ports for jack to connect to, this reduces the amount of ram used, which is why the SuperCollider readme recommends adding the -p16 flag to the jack command in .jackdrc.

Never use the built in audio jack on a Raspberry Pi for anything serious. Instead, you can use any class compliant USB audio interface. These range from cheap 1$ Chinese ones to top-of-the-line RME Fireface UCX. I use and like both of these for different situations.

To see which audio interfaces are available on the pi: aplay -l

With a USB-interface plugged in, the output should look something like this:

Note the card number. Card 0 is the trashy jack on the pi. Card 1 is the USB audio interface.

Then reboot, and run aplay -l to verify it isn’t there anymore.

One of the most important things you can do to improve any Linux system’s audio performance is installing a real-time-kernel. On the Raspberry Pi, you need to compile this kernel yourself. There are instructions for doing so here.

Compiling a kernel takes a lot of time, but my colleague at Notam, Thom Johansen, has built a great RT-kernel for the Raspberry Pi 4 that you can download here. For any other kind of Raspberry Pi, you are on your own (see the link above which has a guide for how to do this).

A big fat warning: It’s a good idea to back up your sd card at this point, if you have important data on it. Screwing up the kernel installation can get you in a complicated situation.

If you are on a Pi 4, then proceed by executing these commands to download and install the kernel:

Then reboot the pi by executing sudo reboot, wait a few minutes and then ssh into the pi again.

If you then run uname -a you should get a result along these lines:

If you haven’t rebooted yet, go ahead and sudo reboot. And then wait for the Pi to power back up again before ssh’ing in to continue.

realTimeConfigQuickScan is a really nice script that you can use to see if your system is setup correctly. Download and run it like this:

You can run many different kinds of software on the Raspberry Pi headless: Pure Data, Csound and SuperCollider are a few free and open source options.

I personally prefer SuperCollider so that’s what I’m going to use here.

The easiest way to compile and install the latest version of SuperCollider is to use lvm’s build scripts. I created my own modified version of them which are tailor fit to a headless Raspberry Pi install.

Run these scripts by executing this massive oneliner:

Let’s create a simple SuperCollider test file which will boot the audio server (and automatically start and connect Jack) to see if the installation went well and we are getting sound out of the pi.

As shown above, you can run any SuperCollider file by passing it as an argument to sclang on the command line.

If you just have a finished SuperCollider-file that you want to run, then this is probably fine. You can use any text editor to make small edits to your files (vi, nano, vim/nvim or emacs are popular choices).

But, really, this isn’t a great way of working.

My preferred way of working (on any computer, single board or not) is using a combination of NeoVim and the scnvim plugin.

To get this combination to work properly, unfortunately you cannot just install NeoVim using Raspbian’s package manager since we need a fairly new version of NeoVim to get it to work (and Raspbian/Debian typically has pretty old “stable” versions in it’s package manager).

Follow the instructions here (look for Debian things, this should be the same on Raspbian) to build NeoVim from source. The neovim wiki is the best place to find instructions on this, but I will condense the commands I used to build neovim on Raspbian below:

Now, verify that NeoVim is installed by running the following command:

If you get any output from that command, you are good to go and can proceed to install scnvim by following the instructions on the project’s github repo.

Exit neovim when it’s done installing the plugin, then finish the scnvim integration by symlinking the SuperCollider classes that came with the plugin to the extensions folder of SC:

You should now be good to go. Open up the test.scd file from before and edit it:

Controlling the pi using a phone 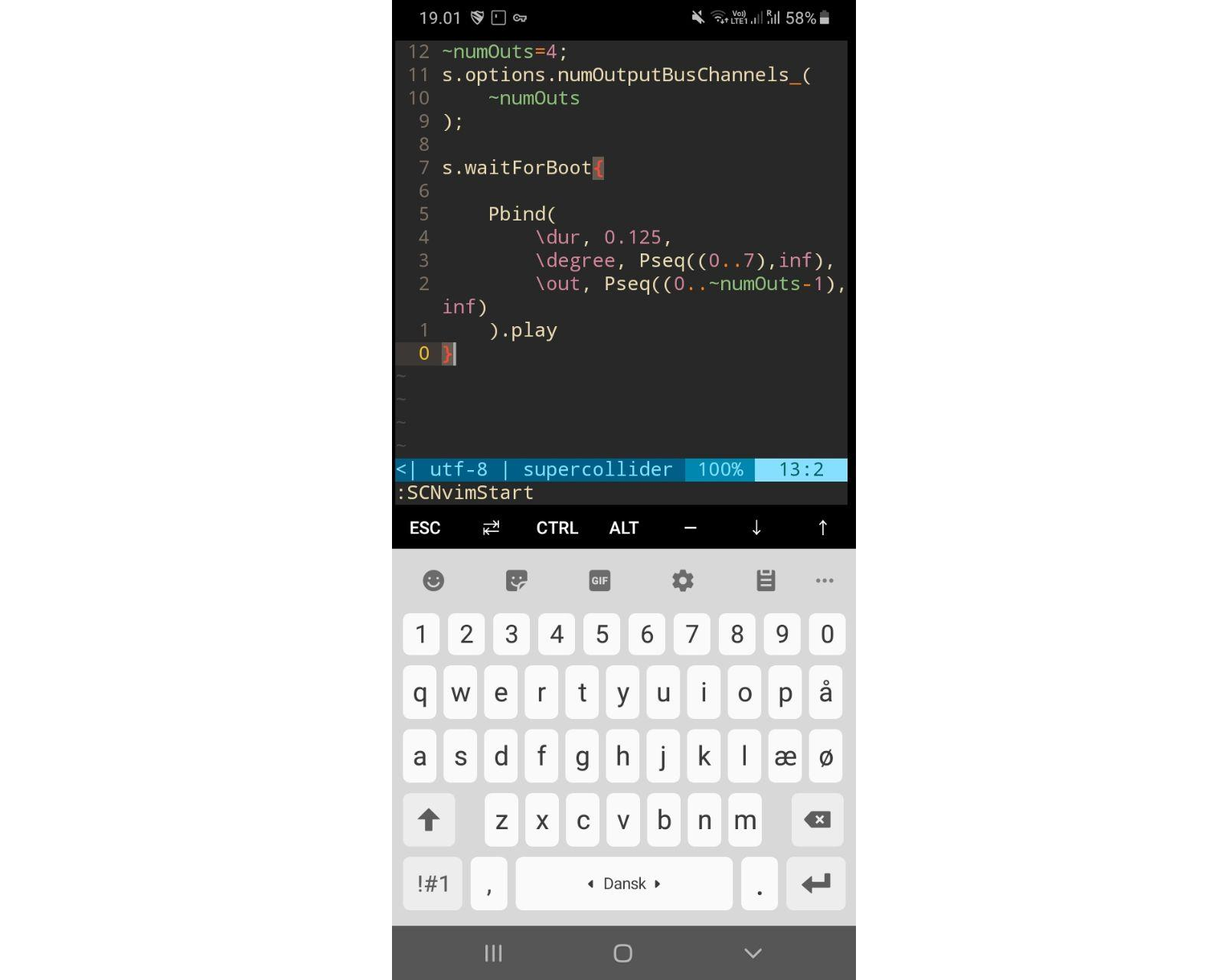 If you installed ssh on your Raspberry Pi you can access it from any computer using the ssh program.

A fun thing about this is that if you have an Android phone you can also use that to access your Pi. 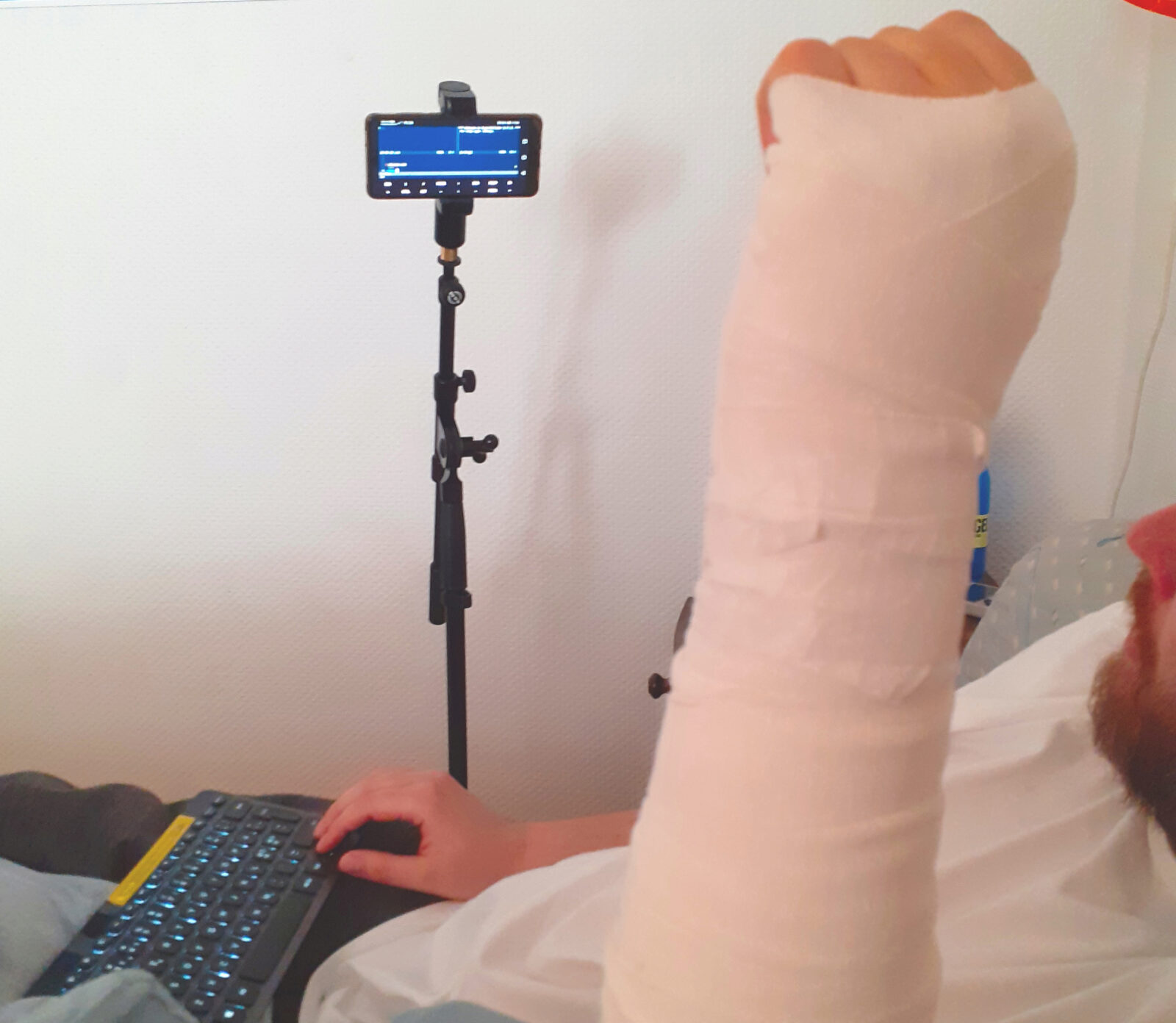 My friend actually used this trick to livecode SuperCollider on his Raspberry Pi while recovering from a broken arm.

And now you’re in your Pi on your phone and can do everything you would be able to with a computer ssh’d into your Pi.

This blog post describes a way to use the Raspberry Pi in a networked audio configuration.

Niklas Adam has done us all a favour and made preconfigured images available which are already setup for audio work. So if you don’t feel like going through this setup process, you can simply download one of them and flash them to a card and you are good to go.

Among other things, there are preconfigured images for Arch Arm !